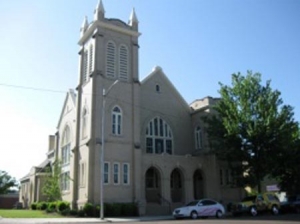 John Wesley started Methodist societies to minister to the common people of England.  Methodist circuit riders spread the gospel to the frontiers of America.  In 1837, Charles K. Lewis, a circuit rider of the Newtown District, organized First Methodist Church as a congregation of eighteen members meeting in the county’s original wooden courthouses.  Three years later, the congregation moved into a framed building on the Oak Grove Academy’s lot.  In 1849 a brick church was built on South Street at the corner of Church Street.  Holston Conference met in this church on October 11, 1849 with Bishop O. Andrews presiding and W. C. Daily pastor.

Bradley Countians were divided during the Civil War.  The county voted to remain a part of the Union.  Southern sympathizers stressed loyalty to the Confederacy even in church affairs.  This was unacceptable to many members, including the pastor, Jonathan Mann, who joined the Union army as a chaplain in 1863.  The church building was used as a hospital and stable during the war.  From 1863 to 1867, the services were held in the Cumberland Presbyterian Church.

The congregation reorganized in 1864 under the leadership of Pastor Mann.  The present Sunday School was organized in 1866.  In 1872 during the pastorate of J. J. Manker, a new brick church building on Inman Street was completed.  The congregation worshipped in the Inman Street building until 1912, when a new building was dedicated on South Ocoee Street.  This majestic building served as our church home until we moved to our present site on North Ocoee Street in 1979.  In the fall of 2002 this site was renovated and expanded with the opening of the Christian Life Center.
First United Methodist Church continues to minister to Bradley County through mission outreach which includes a loving Child Development Center and Parent’s Day Out program, active United Methodist Women and Men’s groups, Sunday School, Bible Studies, mission trips, children, youth and college programs, and many other ministries.

Today the congregation remains dedicated to its purpose, adopted December 9, 1985, to “Proclaim the gospel of Jesus Christ and to foster faith in and commitment to Jesus Christ as Lord.”  Committed and dedicated, our congregation reaches “out in love and witness through our prayer, our gifts and our service.”